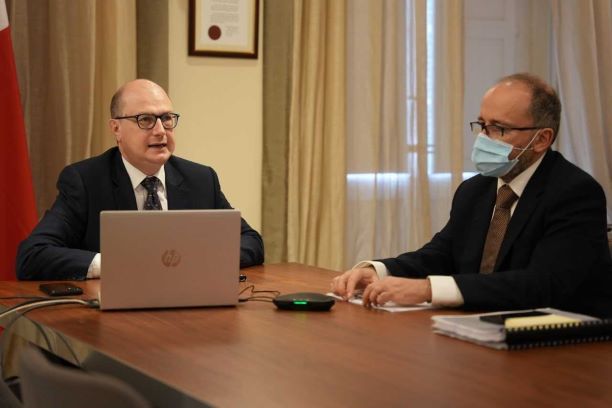 A new system whereby social partners (members of the MCESD Council) are provided with evidence-based research from experts prior to each and every meeting was put to work today during a virtual meeting that tackled a number of national priorities. The topics for discussion included the new Covid-19 measures and what is to follow, the cannabis reform, and the recovery and resilience plan. 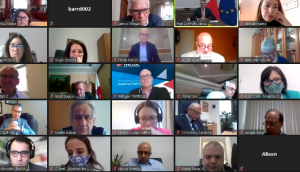 The meeting was organised after calls from social partners to meet and discuss the issues at stake, calls MCESD welcomed immediately.

The evidence-based research was introduced by Chairperson James Pearsall after he was appointed as chairperson in the last quarter of last year.

An overview of the Covid situation, through a presentation of factsheets was delivered by Ms Karen Vincenti and Ms Chiara Tanti. It emerges that the 80+ category was seeing less Covid-19 cases as a result of the jab.

In his opening remarks, Minister Carmelo Abela spoke about the Covid situation and that it was improving as a result of the vaccine intake. On cannabis he said that the White Paper is not about stating that it is cool to abuse of certain drugs but he referred to persons who are caught with a small amount of cannabis and end up having their police conduct stained for years on end for little amounts.

Employers’ Association Director General Joe Farrugia, said that the use of cannabis will have an effect on workers’ productivity but had nothing against the use of medical cannabis. He claimed that not many stakeholders were roped in to give their take prior to the release of the White Paper. He was speaking during an online presentation he gave on the issue. He also spoke about giving community work to youth instead of prison sentences and courses be given to highlight the dangers of drug use. He said that a serious discussion needs to be made before anything is decided.

Parliamentary Secretary for European Funds within the Office of the Prime Minister Stefan Zrinzo Azzopardi gave an overview on the recovery resilience plan. Further details of the situation of the RRP funds was given by the Permanent Secretary Mr Paul Zahra who focused on the what is the purpose of the funds, the quantum in as much as grants and loans and the timeframes for the their disbursement as to be adopted by the European Commission.

Conference on the Future of Europe: MCESD participates in EESC virtual conf...
Scroll to top