The Malta Council for Economic and Social Development (MCESD) is an advisory council that issues opinions and recommendations to the Maltese government on matters of economic and social relevance.  In view of this, the MCESD’s vision is one of continuous improvement of Social Dialogue. We consistently strive to be the most effective catalyst between the Social Partners and the Government. Our ultimate aim is that, following consultations held within the Council, sound and concrete recommendations about socioeconomic matters will be heeded by the Government prior to any reforms or measures of relevance.

Essentially discussions that take place are very much influenced by what the Social Partners experience on a day-to-day basis.  Thus, the topics up for discussion are determined by the external environment.  Since the Government forms part of the Council, it too puts forward subjects for discussion upon which National Policy is often formulated.  The Council is a tool for analysis and, at times, a catalyst for change. The fact that Union, Government and Employers’ Organisations get together to discuss issues of national relevance in a very frank way, is already a great achievement in furthering the development of Social Dialogue in Malta. 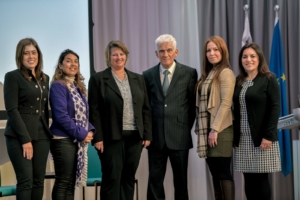 The Council’s success lies in the fact that the various representatives are open and ready to receive suggestions and feedback from their counterparts on the Council, while always remembering that it is Government which has the mandate to implement policy.

Membership to the EU has helped to give a better perspective on what is going on in member states within similar areas of interest, and the Maltese representatives on the European Economic and Social Committee have contributed to further developing such a relevant scenario for the Maltese landscape.  Such information has also helped, and will help, the council in its deliberations on documents or reports that the EU itself has requested, such as Malta’s National Reform Programme, the Lisbon Strategy and the Sustainable Development Strategy.

Under the remit of the MCESD, there are two committees: the Civil Society Committee (CSC) and the Gozo Regional Committee (GRC), both of which, through their respective Chairpersons, have a seat on the MCESD.  This ensures that the interests of civil society groups and Gozitan citizens are considered.

The Gozo Regional Committee brings together regional constituted bodies and it aims to promote new ventures for Gozo for it to be able to boost its social, economic and ecological sustainability.  Furthermore, through discussions and proposals, the Committee addresses the constraints brought about by the double insularity of Gozo.

The Civil Society Committee within MCESD is unique in terms of its identity since it brings together various NGOs representing a wide range of sectors.  It engages in timely and effective debates and discussions on matters that are of interest to the various groups involved.