The Maltese European Court of Auditors (ECA) Member Leo Brincat today said that the ECA is proposing a number of measures to instil transparency in the use of EU funds such as a data collection centralised system of EU funding recipients, in this case EU Member States utilising such funds for projects.

Speaking during a meeting with Mr James Pearsall, Chairperson of the MCESD, Ms Mandy Falzon CEO at Servizzi Ewropej f’Malta (SEM) and Hon. Carmelo Abela, who is the Minister at the Office of the Prime Minister, and other public officials, Mr Brincat explained in detail the role of the ECA, the work of the institution tied to NextGenerationEU – Recovery & Resilience Facility and the challenges of the EU Member States in this regard, including those faced by the ECA. 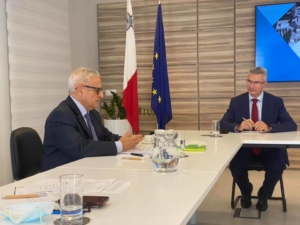 Mr Brincat further explained how the RRF differs from the Multi-Annual Financial Framework (MFF) in its set up as checks are done on the basis of achieving milestones and targets and not on costs.

All Member States’ specific plans have individual priorities, reforms and investments that rely on monitoring systems and KPIs, as well as systems to deal with potential  corruption, fraud and conflicts of interests together with arrangements to avoid double funding and protect the EU’s financial interests.

Mr Brincat highlighted that the foreseen controls must include national systems to ensure correct milestones and targets indicators, agreement on internal Member State internal control systems and recording of data on final recipients.

Mr Brincat said that the RRF is challenging for all, because organisations like ECA need much Member State support to be properly resourced to address the daunting tasks ahead. 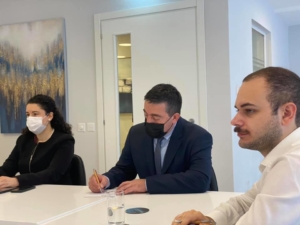 On the other hand, RRPs rely heavily on the absorption and reform capacity of Member States in a very short time, while leaving them responsible for an adequate management and control system.

It is also being proposed by the ECA to set up a watchdog that allows EU Member States to call for checks and balances on other counterpart states in terms of financial expenditure.

Mr Brincat said that the Recovery and Resilience Facility is not an ATM that one can use automatically. Neither is it a set of handouts for ‘charitable’ purposes for the hard hit. But part of an intensive reform process where results finally matter.

The main purpose of the RRF is to accelerate recovery of Member States, make their economies more resilient, reduce economic and sustainable divergences between member states and enhance the green and digital transitions. 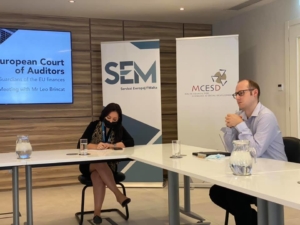 The plan represents a historic opportunity but also a major risk that cannot be allowed to fail. The fight against misuse of EU funds is not new. But the challenges for transparency and accountability on use of such funds was never so strong. This is why it is imperative that organisations like ECA and others have all the resources necessary to carry out such audits and control systems – particularly since this is the largest ever expansion of the EU budget in its history.

Meanwhile, Mr Pearsall underlined that meetings like today’s will continue to be held with other EU institutions to get a clear picture of their work in a bid to widen and strengthen social dialogue.