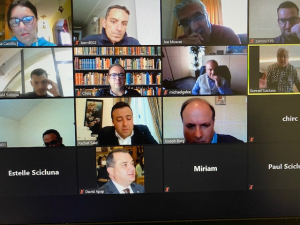 The issue of parking cropped up in relation to the Xlendi project. However, if the government created a Park and Ride service, it would help solve the issue of parking at Xlendi. While some committee members suggested Rabat, others totally opposed the idea as Rabat is already jam-packed with parked cars.

The Minister said that a new Park and Ride system will soon be introduced next to the race course which will transport commuters to Mgarr and eventually Xlendi too.

The issues tied to the uprooting of trees and cycle lanes were also discussed.

The Aquatic Centre project was also discussed. The Minister explained that there are some 5,000 square metres of land and the demolition works have been conducted. He added that the excavation works have also been finalised and the foundation stones will be placed soon. The Minister said that by early next year, the sports complex, which will also host an Olympic-sized pool, should open.